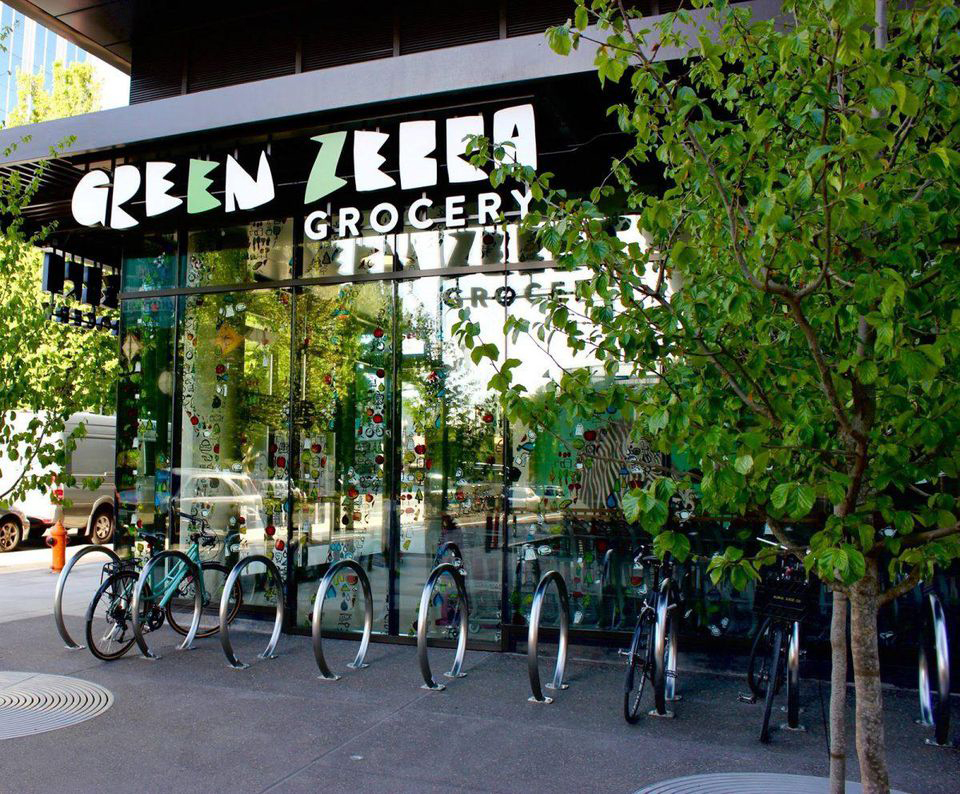 Green Zebra is the future, according to Jeff Lenard of NACS – a convenience store that is part grocery, part bar, part restaurant and most importantly part community center. The chain wants to expand with 100 stores on the West Coast by 2025.

While naming a grocery chain after a tomato may seem odd, this store’s DNA seems to parallel that of its namesake. Green Zebra tomatoes certainly look different – they have light green stripes that turn to yellow as they ripen and then show a blush color at the edges of the stripe; they are actually the result of four heirloom tomatoes bred together. Its flesh, according to Wikipedia, “has a classic tomato flavor and will be tangy and astringent when young then take on a balanced sweet tart flavor once fully ripe”. A perfect description of a grocery start up that wants to create an experience from different concepts and wants to change the way people shop for food. A Green Zebra tomato, by the way, takes about 75 days to mature which means that Green Zebra Grocery has to add 5 new stores next year to stick to the DNA – which is exactly their plan. The long-term goal is to have 100 stores on the West Coast by 2025 three times the growth rate of the Green Zebra tomato.

Four and a half years ago I stepped into the one and only (at the time) Green Zebra Grocery store in North Portland’s Kenton neighborhood to meet and walk the store with its founder and CEO Lisa Sedlar. I made the trip to the store based on what I knew about Lisa’s past. 15 years in the industry since she had graduated from Kendall College with a degree in Culinary Arts – first as Purchasing Director for Whole Foods then CEO of New Seasons Market, a then 20-store chain based in the Northwest which has similar offerings and pricing to Whole Foods.

The store had been built as an A&P decades before and is approximately 5,000 square foot, about one-seventh the typical grocery store in the U.S. that now averages about 40,000 square feet. Sedlar doesn’t see Green Zebra as a grocery store though – her vision is something of a hybrid corner grocery from her grandparent’s time and a modern day convenience store for urban neighborhoods where people shop daily and mostly walk to the store. Green Zebra offers discounts to customers that walk or ride their bike to the store. The average customer spends on average $10 a visit and buys 2-3 items each time. The industry average, according to the National Association of Convenience Stores is around $6 per transaction and that includes sales of cigarettes and tobacco which coincidentally is the number one category in the c-store channel (Green Zebra does not sell any tobacco products). She estimates that her customers are spending the same amount with her as they would in a traditional supermarket on an annualized basis. The number one seller in the store is their organic salad bar. Sedlar shared that “it turns out if you put a salad bar in a convenience store format it becomes your number one seller in no time flat because people want healthier options.”

The neighborhood, when I visited, was on the borderline of an emerging neighborhood and a part of town that was downtrodden. When I asked Sedlar about the location, she said she wanted to bring healthier foods to everyone in the area. Sedlar has stuck to her Whole Foods and New Seasons roots and Green Zebra is focused on healthy, fresh, local and organic foods, with lower prices than her previous employers, and a pinch of indulgence thrown in.

Sedlar’s mission is to redefine what it means to be a convenience store in America. She told me why, “they (convenience stores) are usually filled with cigarettes and sugary drinks and things that are not healthy; and we are all about offering our eaters choices that they want that help further their healthy life style. So instead of the sugary drinks we do Kombucha and even taken it one step further and developed a Kombucha “slurpee”.

The company’s three existing stores (a fourth Portland store is under construction) generate about $12 million in revenue and Sedlar says their margins, in her words, are “super healthy and are best in class” at 40%, exceeding the typical margin which according to Jeff Lenard, Vice President of Strategic Industry Initiatives for the National Association of Convenience Stores (NACS), is 34% for c-stores that do not sell gasoline. Green Zebra stores do an average of $4 million each, which is well over twice the national average of $1.53 million per store, according to NACS. Green Zebra today has over 100 employees, most of which are full time, which is a rarity for the industry. Lenard also said a major difference between Green Zebra and other convenience stores is the transparency with the employees, Sedlar he said, holds quarterly meetings with all the employees and opens up the books to show them all the financials in order to empower them to have a greater stake in the company. “Everyone knows how the business works,” he told me.

Eric Rosenfeld the founder of Oregon Venture Fund, one of Green Zebra’s first investors in 2013 told me “they never imagined investing in grocery, its not what most venture funds want to do, but what got them interested as they started investigating the opportunity was the corner coffee shop had been disrupted by Starbucks, the corner sandwich shop had been disrupted by Subway and they realized that no one had done that yet with the corner grocery store.” He went on to say that “7-eleven is frankly not that compelling to the next generation, nor is the corner mom & pop store which is often run by immigrant families and look tired” which showed them that the channel is ripe for disruption. And they wrote the check. Rosenfeld says Green Zebra is a big idea and would love to see the chain grow to 100 stores and to $250 to $500 million in annual revenue.

The exterior of a Green Zebra Grocery store, note the letters E and Z are highlighted in green to reinforce the convenience of shopping. Shoppers who walk or ride their bikes to the store get extra discounts.

Lenard says that there is “something cool going on there”. Green Zebra is the future he says – a convenience store that is part grocery, part bar, part restaurant and most importantly part community center.” On a recent visit with his two daughters, his youngest pointed out how the “E” and the “Z” in the store’s outdoor signs are in green (while the rest of the name is in white) – Lenard says that that's the most important element to a convenience store, being “easy to shop.” You can have all kinds of cool and hip foods inside, but if its not EZ people will not shop there.

The initial rounds of funding raised $9 million that covered the first 4 stores. Now they are in the midst of another round, led by Meriwether Group, for $10 million to fund the new stores in Seattle.

Sedlar has big plans for 2019, and she is focused on Green Zebra being an omni-channel retailer and leveraging the four walls of the stores to the max.

Green Zebra Grocery is heading to Seattle next year and the plan is to open 4 to 5 stores there, and then move south into California. They are also launching Micro Green Zebra stores that are 400 square foot and will be located in office buildings, with at least 500 employees, where they also have a street side entrance for the public. The first one will be in the main lobby of the Custom House in Portland and will open in January. It will operate on the honor system where customers will pay through their mobile devices. Sedlar told me that since there are no employees there would be “lots of profit.” Each micro store costs less than $10,000 to build and she said she has been inundated with companies requesting one as an “amenity” for their employees. She sees the opportunity for micro-stores in hundreds of office buildings. Which may be a very smart move as Lenard predicts there will be a downturn in the economy; these low cost high margin micro stores may offer the cushion Sedlar needs if and when that occurs.

Today Green Zebra does use a third party for delivery, but Sedlar wants to develop their own forms of delivery as she feels that the opportunity that is being missed is connecting the Green Zebra brand door to door. One option, she says, is robotic deliveries.

Green Zebra is also launching a healthy snack box subscription plan this December for businesses that want to offer their employees snacks. Sedlar is also looking at expanding into vending with healthy, but focused offerings – such as a Kombucha only vending machine that she would initially launch on college campuses.

Sedlar says that the time to expand is now. She feels that right now other people are catching on to this idea, but the difference is that they are either a conventional store with a few natural products scatted around or they carry all natural foods and beverages but “kinda precious” – they are not stores where you will do an everyday shop she says – which is something Green Zebra strives for.

Lenard is thrilled that Sedlar wants to grow Green Zebra in the convenience stores channel, but he adds a note of caution. He says has seen a lot of small c-store operators that started with a few stores and tried to grow but failed due to a lack of capital. He also half jokingly wonders what happens to Green Zebra if Kombucha falls out of favor (he notes that Sedlar told him that sales of Kombucha in Portland are 78 times the national average)... a bit unlikely since its origins date back to 220 B.C. in northeast China and is expected to grow to a 1.8 billion industry by 2020 according to MicroMarket Monitor. I don't think she has to worry.