Insights for Supermarkets Looking to ‘Up Their Game’ This Sunday! 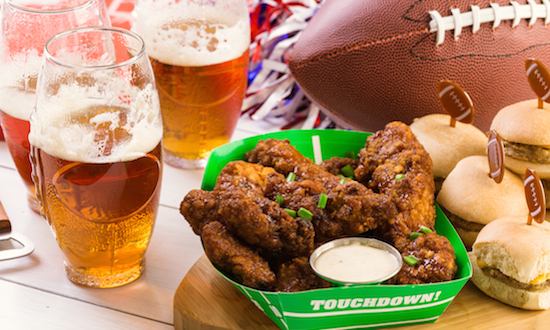 What retailers need to know to take advantage of one of the biggest food days of the year!

For just the second time in history, the biggest game in football will be held in Minnesota on February 4th, 2018. “The Big Game” is a nationwide food-first phenomenon, and some say it’s more than just a game, it has become an American holiday. And it’s the #1 TV event of the year.

Historically, supermarket and grocery visits peak 20% higher for the NFL Championship game than an average weekend. And this year, viewers and partygoers plan to spend an average of $75 on food, decorations, team apparel and more. And 50% of these football fans will do their shopping just a few days before the game.

Here are some great examples of how retailers have taken advantage of this opportunity:

We all know chicken wings are a big hit during the big game. Americans are expected to consume 1.35 billion wings on Sunday, according to the National Chicken Council’s annual report, and spend $49 million on dips, according to Nielsen.

And if you want to take a look at what people are craving in your specific state, Google has compiled a list of most Internet-searched foods by state leading up the Super Bowl. The answers may surprise you!

Remember baskets of online shoppers are often bigger Stock Up Trips – because they get home delivery or curbside pickup at the store. Fifty-three percent of grocery shoppers today use retailers’ apps to shop at the store,  59% look for sales or coupons on their mobile devices.

One last thing to consider is the social media activity that explodes during this event! Neilsen reported 190.8 million interactions across Facebook and Twitter from 48.3 million people in the U.S. about the 2017 “Big Game.” Don’t forget to use those hashtags in all of your online promotions and social media interaction!