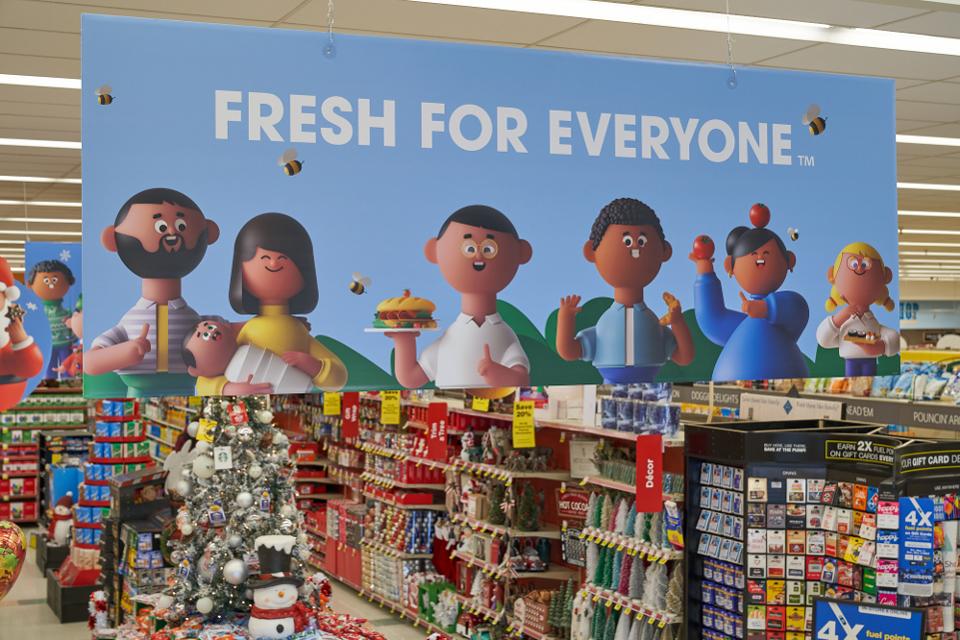 The 11 million shoppers across the 35 states where Kroger operates stores are no doubt familiar with its longest-running ad campaigns, including “Right Store, Right Price” or “Kroger Means Meat,” but the company has rebranded with a modernized logo and a new tagline.

The 11 million shoppers across the 35 states where Kroger operates stores are no doubt familiar with their longest running ad campaigns including “Right Store, Right Price” or “Kroger Means Meat” but today the company has rebranded with a modernized logo and a new tagline that will appear on almost all of their 20+ banners Fresh for Everyone.

Mandy Rassi, Kroger’s Vice President of Marketing told me that the company’s rebranding process began a bit over a year ago with strategy sessions and customer research conducted with 84.51 (Kroger’s subsidiary – of which Rassi is also an alum) that focused on the insights of how people were getting their food needs met, where is food culture going and how it is evolving and most importantly how people thought about Kroger and other food retailers. Her goal was to really get grounded in the customer and the data and uncover the point of difference between Kroger and its competition.

What they discovered is that the intelligence led them to all the ways customers aspire to eat – and they focused on the gaps between aspirations and the day-to-day reality of how they actually eat. The gaps included the cost of foods especially in the case of organics and fresh, convenience, time, inspiration, having more recipes and knowing how to prepare foods.

Fresh for Everyone, according to Rassi, is a campaign that says a lot more than fresh and “should not be about the haves and have not’s” its about making food available to everyone and filling in those gaps about what and how you want to eat and how you get the foods. Topline is they want to be their customers’ partner in helping them get the foods they want to eat more often.

The campaign itself will use television commercials, billboards, outdoor, print in-store and radio and uses a combination of mostly animation of customers (or Krojis – a combination of Kroger and emojis) in all colors, sexes, shapes and sizes including one of Santa that reinforces the Fresh for Everyonemessaging and incorporates high impact actual motion video footage of the actual foods themselves to reinforce Kroger’s passion for food; and celebrate the food’s freshness. Kroger chose this combination of media because, as Rassi said, when you look across all grocery media, including on social media, there was a sea of sameness. “Strip away the logos, and it is impossible to tell the difference between the retailers”. They also liked animation because it is certainly differentiating but especially for the “everyone” piece. Animation she says actually allows the customers to see themselves in the stories, sometimes even more so than using real people that one might find hard to relate to based on their hair color, or looks, or body type. With animation you start to fill in the blanks between yourself and the character on the screen and relate more.

Another part of the campaign that I believe to be a game changer for the grocery industry, is that between now and January 1, Kroger is offering free grocery pickup (generally they charge a $4.95 fee), which Rassi said they would be evaluating after the promotion and may decide to continue the free pick up offer.

No doubt, this will start a delivery charge battle with other grocers in Kroger territories that may be charging for pickup. Most importantly we have just witnessed for the fourth time a national multi-day ‘strike’ by Instacart shoppers (which ended yesterday) and may well drive people away from choosing delivery and to click & collect.

Kroger’s efforts to differentiate themselves from Rassi’s “sea of sameness” couldn’t come at a better time.