The Reopening Of Woolworth's: A Reminder To Find Your Store's 'Story' 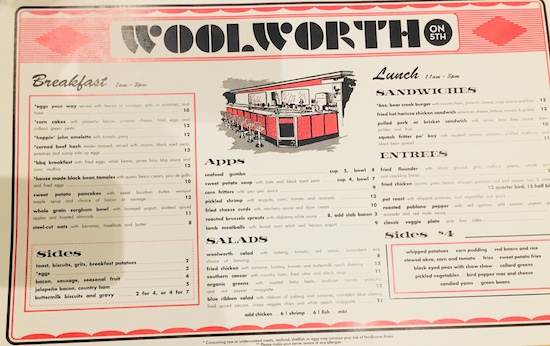 I can remember well sitting next to my grandfather at the Woolworth’s lunch counter as a young girl in South Georgia, me with a Coca-Cola or a milkshake and some kind of “five and dime” treasure I had just chosen and my grandfather with his coffee and newspaper. It was a small town, and the Woolworth’s store was the only place of its kind within miles and miles of red clay and tobacco farms. I had no idea how, later in my adult life, the return of a Woolworth’s lunch counter would have so much deep important historical and social meaning.

Last month, in Nashville, where I have lived for the past five years, the downtown Woolworth’s on 5th, originally opened in 1930, reopened as a restaurant, classic lunch counter, jazz music speakeasy and happy hour mezzanine, complete with the original terrazzo floors, a grand staircase and banister, a large projection screen with black-and-white films of performers from Sam Cook to Jerry Lewis, and a long wall displaying a gallery of photos documenting one of the South’s most important civil rights events in history, the Nashville Student Protest Movement. The “sit-ins” started with 124 students, including civil rights leader and congressman John Lewis, walking into the Nashville Woolworth’s and sitting at a segregated lunch counter.

These sit-ins, initially peaceful, over the course of days led to white resistors violently attacking the African-American students, which then led to a silent march of a few thousand people up the steps of the courthouse, where they asked the mayor to desegregate lunch counters. On May 10, 1960, Nashville become the first Southern city to begin the process of desegregating public facilities.

When you walk into the new Woolworth’s on 5th, you are immediately engaged in the “story” of this iconic five-and-dime. The menu features a mix of traditional Southern fare like pot roast and friend chicken along with some twists on traditional Southern dishes, like a hot Harissa chicken sandwich, a pimento-cheese-topped burger, and a squash fritter po' boy with black bean spread and an array of creative in-house condiments.

Now, I wouldn’t exactly call myself a “hipster,” but I do enjoy retro design, particularly with a midcentury sleekness, and I do enjoy adventurous food. But the real inspiration I see for modern retailers to take away from the reopening of this Woolworth’s store is the impact a store’s “story” can actually have on the consumer experience. In this case, every detail — the decor, the retro verbiage and typeface on signs, the photographs on the walls, the look of the menu — prompted my curiosity and fascination.

Modern shoppers have shown time and time again that they are more interested than ever in where their food comes from, how it was prepared, what farm the foods were produced on and where and how the animals were raised. So it would make sense that shoppers might also be interested to know the story behind the store as well.

While your store could have historical significance or could have originated from an interesting family business, the story doesn’t have to be centered on the past. If your store is a product of new construction, perhaps there’s a story to tell about how it was designed. Does it have particular elements that are more environmentally friendly, or does it offer a unique experience aesthetically? Who were the first customers in your store? Or how about the first employees? What about hanging a model of an original logo design somewhere in the store? What foods have you sold the most, and how can you feature their story?

If you feel inspired by Woolworth’s, gather your employees together to brainstorm over coffee on what your best “story” is to share with your customers. We believe your employees will also appreciate the opportunity to think about what’s so unique about where they work. After all, who doesn’t enjoy a great story?