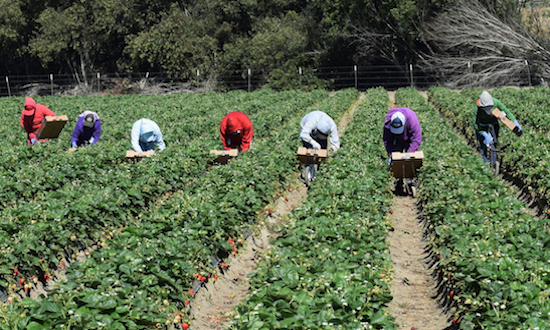 It's a tough time for immigrants and good time to remember what they do for the food industry.

It is without a doubt a tough time for immigrants in America. As promised in his campaign, Trump has persisted with an aggressive position on undocumented immigrants, and even those with legal status have been challenged. And politics, Twitter battles, and lawmaker public spats aside, in the food industry, we can all agree that immigrants are an integral part of our food system and deserve our respect for the service they provide.

Following ICE raids on of 98 7-11 convenience stores across the country, resulting in 21 arrests, employers and employees are left with fear and anxiety of being the next target and example made by ICE officials that have said they are on a mission to protect American workers from having to compete with illegal immigrants for jobs. Clearly, immigration is logistically and psychologically complicated and particularly because this involves humans, their livelihood and an opportunity for a better way of life.

7-11 certainly isn’t the first of these types of raids. In fact, in 2012 grocery chain, Mi Pueblo, was investigated across 21 stores, which led the company to join the federal E-Verify system, which checks immigration status of potential employees, and also discourages those illegal immigrants looking for employment to apply for a job with those companies using the system. And this is probably good advice for all retailers to follow.

But what about the fact that 57% of farm workers are undocumented? With stricter laws and crackdowns, those fearing deportation are disappearing from the workforce and needed to keep American agriculture producing at their best. The food we eat is primarily harvested by Latinos, and these are jobs Americans don’t want. The work is physically challenging, pay is low and conditions are less than ideal. Even amongst the latest historic wildfires in California, farm workers have continued to save crops.

And what about our restaurant industry where according to BLS statistics, 1.4 million workers are immigrants? A 2008 study from the Pew Hispanic Center suggests even higher numbers citing that nearly 20% of restaurant cooks and 30% of dishwashers are undocumented immigrants.

We are living in a food era where consumers are more concerned and involved with ethical practices across several topics which include fair and humane treatment of employees. And these practices can very quickly affect a shoppers purchasing decisions and improve shopper loyalty or drive customers away.

Here are some statistics that make this perspective even more convincing:

While no doubt, businesses should take steps to protect themselves from legal challenges, as a food industry, we owe it to our immigrant workforce to stand up for their important and vital contribution to our food system, and as consumer attitudes continue to reflect a compassionate position on this topic, shoppers will appreciate those businesses that do so.