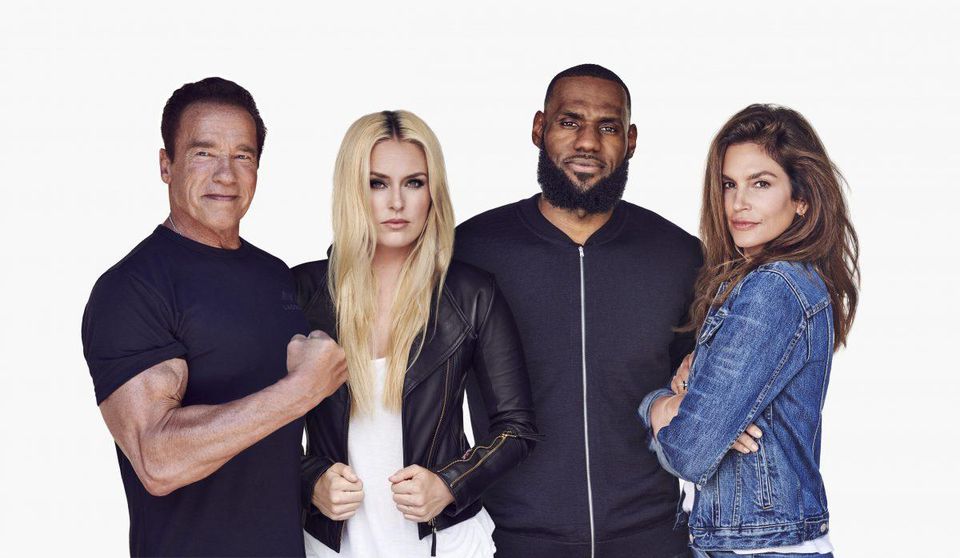 Ladder wants to become the most important online resource for health and wellness and build a community of tens of millions of people through education and a subscription model nutritional platform.

Basketball player LeBron James, actor and former California governor Arnold Schwarzenegger, fashion model Cindy Crawford and Olympic gold medal skier Lindsey Vonn have joined forces to create a new wellness community called “Ladder.” Unlike other celebrity driven brands, these four are not paid endorsers – they own the company along with an investment from Main Street Advisors, the investment advisory and financial planning firm. The idea for Ladder grew out of LeBron’s severe cramping incident during the 2014 NBA Playoffs, according to Adam Bornstein chief of nutrition for the company. Bornstein and Jack Gray, chief marketing officer, who spent 14 years at Adidas where he held numerous senior global positions, the last one as the head of US basketball, were the first two employees and sat down with me the day after launch to explain the history, goals and opportunities for Ladder.

“This is something that was genuinely started by LeBron James,” Gray told me, “and it spurred out of his challenges to find the right products on the market. He spends so much money on his body each year and is constantly looking for ways to improve. Because of his relationship with his trainer Mike Mancias, who has been integral in keeping him on this narrative, after the cramping, they went out and said, 'What can we find on the market that can help us with this?' … And they couldn’t find what they needed.”

Which led to a larger conversation with Arnold Schwarzenegger, who had just left a deal at MusclePharm and then brought in Bornstein who was an exercise physiology and psychology researcher at the University of Colorado and the University of Florida, Fitness Editor for Men’s Health Magazine for four years, and Editorial Director for Livestrong.com. He believes that fitness and nutrition is about behavioral change. He recalls clearly being “called into a meeting back in early 2016 and the whole idea was after Mike and LeBron had discussed the problems really with the entire nutrition industry and health and wellness in general. It was, what would it take to go ahead and build products the right way, and the right way means starting with ingredients that you can trust, (not only) the source of ingredients but also the efficacy of them because so many people will just put anything in there and even if it’s the right ingredient, the dose is wrong. There’s nothing to support that ‘right ingredient, wrong dose analogy’ I make. You know that water is good for you but if you only have a single drop of water, are you hydrated? And the obvious answer is no”.

Gray, Bornstein and Stephen Koren, the former VP, Strategy and Corporate Development at Harry's, Inc., the direct to consumer shaving and men’s grooming brand who serves as President and General Manager at Ladder look at themselves as more of a platform and community. Product is one avenue for us to get this out there with obviously some big founders, said Gray, but we really do place a huge emphasis on content. “Adam has obviously a strong editorial background and we’ve brought on a significant amount of editorial staff”, he told me. “We really feel it’s important and to make sure that people, regardless of whatever trend it is, Keto or anything, we’ll just state what the facts are and give it to you in such a way that you can digest it and you can be like, “Okay, great.” Things are simple, they’re supportive, they’re clear”. Their mantra, and slogan, is “Life Is A Workout.”

Ladder has decided, for now, to be a direct to consumer subscription service. You go to their website, WeAreLadder.com, you take a 6 question quiz based on your exercise preferences, lifestyle, habits and needs; based on the results they recommend a customized nutrition plan and send you a box each month with two of their products tailored to your profile. Each month, the subscription starts as low as $60, and you can receive 2 recommended products from Ladder's team of experts (or you can build your own box). The subscription also includes a gift every month (the first box includes an insulated water bottle).

Why go direct to consumer? Gray explains, “we are talking about people feeling overwhelmed, people feeling fear, people feeling like they’re not being supported, direct-to-consumer for us was the way for us to control this narrative out of the gate. And I think for us it was really important to establish this brand and establish the backstory first and then over time, we can obviously go into wholesale”. Since I took the quiz I have received well-written motivational and informative emails that are designed to make you feel part of the community, and that you are not on the path alone. Bornstein and his team also answer emails from their customers that have specific questions. The day I interviewed them, Arnold was in the office answering questions on phone calls from customers.

Ladder’s products include whey protein, plant protein, greens and energy, for now. You can change the selection of products if desired, but Bornstein stresses that Ladder wants to change behavior and sticking to their recommendations will be more effective. “If you truly want to help people,” he said, “nutrition products can be one component but you need community because you need accountability and support - and you need information because you need that clarity. The reason why when you look at the models of behavioral change is that people feel like they’re out of control. They feel like they’re out of control because things aren’t simple enough. When things aren’t simple enough, they don’t understand what to do and that just leads to erratic behaviors that leads to try ten different things and end up worse than at the start. So the whole idea of Ladder in the name itself is built on this foundation of, “Let’s give people support”.

There are important points of difference between their products and others on the market. First is that there are no “proprietary blends” – they believe it is critical to be transparent on all their ingredients. The second is that they are NSF Certified for Sport; this certification requires that every batch be tested – less than 1% of nutrition products receive this certification. Bornstein says they will verify that label claims are accurate that there are no dangerous toxins or metals; and most important for LeBron or Lindsey Vonn is that there are no banned substances. So, he told me, it started with “Let’s do the research. Let’s do the legwork. Let’s find out the right ingredient, the right dosage, the right interaction, the right source of ingredients, the right manufacturer,” and that was about the first year, year and a half of Ladder before it was even called Ladder, it was him working with similar advisors and scientists, one in particular, Dr. Abbie Smith-Ryan out at the University of North Carolina, who runs their Exercise Physiology program, and then trying to decide what really works because most things don’t. He says, “A lot of supplements are just a bunch of bullshit”.

What’s the future hold for Ladder?

Jack Gray says that they are blessed that they have four very large founders and I think everyone’s been very conscious of, “This is a brand. Let’s build a brand and let’s not try to go out the gate and try to blow everything out of the water.” So he says there isn’t a subscription goal. He says it isn’t like, “Hey. Let’s try to make as much money as we can,” and then there’s an exit strategy in three or four years. We’ve been given more of like, “What do you guys envision for this brand?” and I think our vision is that product is obviously one component of this but as we get over time, the value of the community, the value of what we’re creating as a platform to go into different verticals is going to be really important”.

He has more of a larger ambition over time. Gray says that the logical expansion for Ladder is obviously layering on a la carte purchases, and giving people “a little bit more flexibility with how they can enter the brand”. He sees a huge opportunity with athletic leagues. The NSF certification is paramount to anyone that’s an Olympian he says and wants to expand into that business. He says he does not have a hard-and-fast ambition of 50 million subscribers in five years, and turns to Bornstein to ask him if he has a number in mind.

Bornstein says he does have a goal in mind. “I would love to watch this to go from 10 million to 20 million to 50 million visitors per month, coming to be educated, having a trusted space where if people have questions, we can then ingest them and turn them into answers that solve those problems. “The whole reason I was brought on here is that I’m known as almost like someone who is agnostic in this space because I’m not married to one approach or another. I’m married to the idea that like people are genuinely frustrated with their health. It’s so hard to figure out what works and that’s something that’s deeply personal to people and there’s so much misinformation out there. So for me, if someone has a health, fitness or nutrition question, I don’t want them to go to Google. I want to them to go to Ladder.”