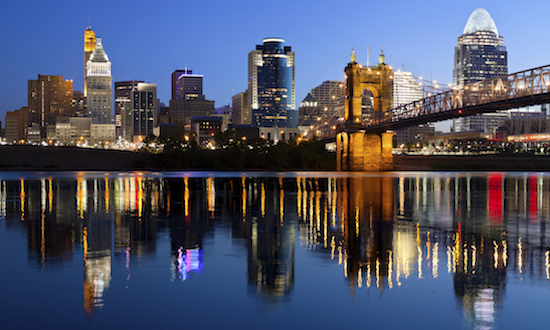 A Barclays Capital investor report found that on two-hour delivery orders between $35 and $50 from both chains in Cincinnati, Whole Foods orders averaged 2% to 7% less than Kroger orders.

The news has to be embarrassing for the nation’s largest supermarket chain, which happens to be headquartered in the Queen City, but it's good for Amazon, which saw its stock price drop by 3% on Thursday after the president’s tweet storm against the retailer.

A Barclays Capital investor report found that on two-hour delivery orders between $35 and $50 from both chains in Cincinnati, Whole Foods orders averaged 2% to 7% less than Kroger orders.

Barclays’ analysts noted that they assumed Kroger’s prices were the same both in store and online, although Instacart does allow retailers to vary prices though the service and each retailer's pricing policy is posted below its logo on the app. In one area, for example, Kroger’s pricing policy on Instacart states, “Item pricing for this retailer vary from the in-store prices in your area,” which may account for Whole Foods’ advantage in this survey. Instacart does not serve Whole Foods in Cincinnati, although it does in many other areas across the nation. Here in Santa Monica, California, Instacart offers "everyday store prices" at Whole Foods.

Amazon continues to chip away at Whole Foods’ "whole paycheck" image. First it very publicly announced lowering prices, then it added deep-discount holiday-focused promotions (Thanksgiving foods being the most high profile), then it announced a 5% discount for using the Amazon Prime Visa, and most recently, according to CNBC, it tested 10% discount signage in Austin, Texas, for Prime Members. The signs include the copy “Blue signs mean special deals just for you,” no doubt hoping to play off the once-infamous “blue-light specials” at Kmart underscoring high-value and unexpected savings. A spokesperson at Whole Foods denied the test to CNBC, although the cable network did publish images of the signs in a store.

Barclays also conducted a survey of 400 Amazon Prime members in the Cincinnati and Dallas markets and found that 33% of shoppers said they now visited Whole Foods more often and believed the prices at the retailer had come down since Amazon’s acquisition.

Whole Foods didn't come out ahead across the board in the Barclays report, however: On the items compared in store in Cincinnati, Kroger handily won, by an average of 14%. Barclays’ analysis by department found that the premiums at Whole Foods varied: fresh produce +29%, frozen foods +18%, dairy +17%, "other" center store +13%, proteins +5% and non-food items +3%.

While this is a limited comparison in just one market, it does have three important takeaways. The first is that Amazon continues to outmaneuver its competitors by strategically choosing where it is testing to intentionally poke them where it hurts. The second is that it can make Whole Foods competitive with mainstream grocers. The third and most disruptive is that there is no doubt that Amazon can dominate online grocery, which is predicted by Nielsen to capture 20% of all grocery by 2025, reaching $100 billion in sales. But Amazon Prime Now is keeping Amazon/Whole Foods from reaching that domination, and until that service is nationwide, other traditional grocery retailers and Instacart have the advantage.