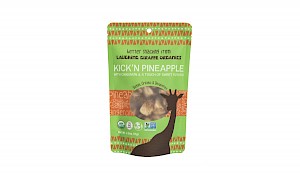 Kick'n Pineapple is a HIT!

This is a delicious snack. The pieces of pineapple are soft, so they do stick together in the bag and you have to pull them apart; but it is worth it. Just the right touch of sweet potato and cinnamon - and there is actually more sweet potato than cinnamon, so it should be called sweet potato and cinnamon! And a touch of clove which adds so much. A 1 oz portion is 70 calories, no fat, only 5 mg of sodium, 17 grams of carbs of which 16 are sugars and only one gram of added sugars, which is actually coconut sugar.