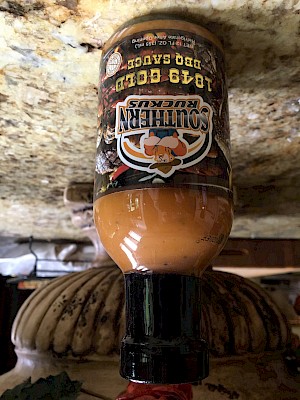 The good news is that unlike so many BBQ sauces this one doesn't have sugar as the first ingredient. Instead the first ingredient is mustard and the second is ketchup, which contains high fructose corn syrup. The flavor is very much so mustard and might actually overpower the foods you are adding this to. For the true BBQ aficionado this might disappoint as there really is almost no hint of BBQ flavor. Two tablespoons are 30 calories, half a gram of fat, a whopping 240 mg of sodium, 6 grams of sugars of which 5 are added sugars and one gram of protein.