Beer and BBQ This Memorial Day 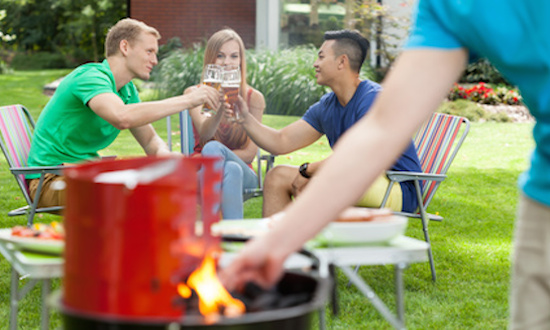 With Memorial Day just days away and the kickoff to grilling season, barbecues of all sizes and shapes will be firing up to partake in some fine grilling and, of course, some malt beverages to go with them.

With Memorial Day just days away and the kickoff to grilling season, barbecues of all sizes and shapes will be firing up to partake in some fine grilling and, of course, some malt beverages to go with them. However, pairing the right beer with the right food can make all the difference in the world between having a good barbecue and a great one.

Most of us now can pair wine with food, but beer is an entirely different story, but sometime much easier for example, a flavorful dark beer compliments all cuts of steak, pork, game, lamb, potatoes, cooked vegetables... pretty much anything off the BBQ. The rich and sharp flavor of the ale compliments the sweet and smooth flavor of meat, especially grilled meat, hitting all areas of the palate.

The crisp taste of BBQ food smothered in a sweet and tangy sauce partners nicely with the rich and smooth flavor of a brown ale. You can even use beer as a marinade. The malty, hoppy flavor particularly dark beer tastes awesome with pork, beef, and chicken. It’s also great as a barbecue sauce, but use sparingly because the hops can leave a bitter taste in the sauce.

Beer & Mustard: a great compliment for dark ale, are foods or sauces with mustard. The tangy and sour note of mustard melds with the hops acidity in beer and is balanced by the thick malt residual sugars in ales.

Beer & Cheese: not many folks realize that beer and cheese have far more in common than wine and cheese. Both are simple and nutritious, and carefully nurtured in an ancient fermentation process. Semi-soft cheeses, Muenster, Gouda, Havarti, Tilsit, Liederkranz, Port Salut, American, Colby, Monterey Jack and similar cheeses all go well with more energetic and flavorful beers such as English brown ales.

Beer & Seafood: beer can actually be used to steam clams and mussels and other shellfish. All popular dishes for the summer time.

Beer & Chili: beer adds an incredible amount of flavor to a thick chili with meat and spices – another great summer recipe.

Beer & Brats: a popular recipe, but not often used with dark ales. As with other meats, the richer flavor of the dark ale adds to the overall taste of the brat. Spread a spiced mustard on the cooked brat and the flavor of the dark ale really comes to life.  Beer and brats isn’t a revolutionary idea, but there are definitely new takes on the old favorite. Most of the time brats are boiled in a light beer, and although it gets the job done, boiling in a dark beer adds flavor. Boiling beer brings out the hops and malt accents, making it that much more flavorful when it hits your tongue.

Do keep in mind that beer contains gluten, so if you are cooking with beer, make sure to ask your guests ahead of time if they have any food allergies.

Be safe and enjoy this Memorial Day weekend.